Assault and arrest: So a few days ago, while at a dollar store for a some inexpensive Valentine's Day odds and ends I needed to assemble a care package, a man approached me. Mid-thirties black man (very disheveled, dressed all in black). He tells me I look friendly and he needs help. I was prepared to help right then. He pulls out a gloved hand rather abruptly, but it just has 2 quarters in it. I breathed a visible sigh of relief as he proceeded to ask me for cash NOW. I smiled at him and told him that while I was unemployed and had no "cash" I could spare at the moment, I would happily share my lunch with him. He makes a sudden move to knock into me and someone else comes into the aisle at the same time (so thankful!) and I yelled out to her "THERESE - what in the world are YOU doing here!" (like I knew her...). It was enough to distract him and I quickly hurried away. Then I apologize to the stranger at the end of the aisle and tried to explain myself. She interrupted me and goes on to tell me that he just cornered her and threatened her one aisle over. Eek. Then another woman walks up to both of us and says he did the same thing to her last Thursday, and yet another said he did it to her last Saturday. Then we hear another woman sounding like she was in distress an aisle over. So I discreetly make a bee line for the manager, she deals with it. I check out and leave. End of a not-so-eventful-story, right? So then I walk across the parking lot as I leave the store (in silence), the hair on the back of my neck suddenly feels electrically charged and stands up on end with goosebumps for NO reason. I get a sudden feeling of panic rush through me and I turn around, prepared to confront an attacker. It's the creepy guy from the store. Only he isn't coming for me. This time he has a couple (man and woman) up against their car and making threatening gestures at them. They are mid-assault and I know I can't physically overpower the guy and stop the assault. Somehow your brain just makes decisions in that fight-or-flight mode. I ran into the next retail store in front of me, get them to call a cop who is stationed at the shopping center (so glad I knew that detail about that shopping center!). By the time the cop arrived (literally 2 minutes), the guy had run off to the other long end of the shopping center parking lot, having gotten nothing from the couple. And the panicked couple is now huddled in their car in tears, while the attacker is now lifting handles on cars trying to get into them. So I literally walked up to the guy WITH THE COP as he's trying to break into cars and say "that's the guy" and then disappeared as he's being arrested (which I totally told the cop I was going to do beforehand...and he agreed that was fine). Bizarre experience, scared the daylights out of me. Thankful that the guy never saw my car, in case he frequents that shopping center (who knows!). I did go back and tell the managers of both stores that he was apprehended. Both were women who had to work late and close the store by themselves that night and I had remembered that detail. The look of relief on their faces... it was a gift. I'm praying for that man though (he told me his name was 'Marcus', though who knows if that's true!). So, prayers for Marcus, please. Whatever led him to those choices definitely needs some prayer added. 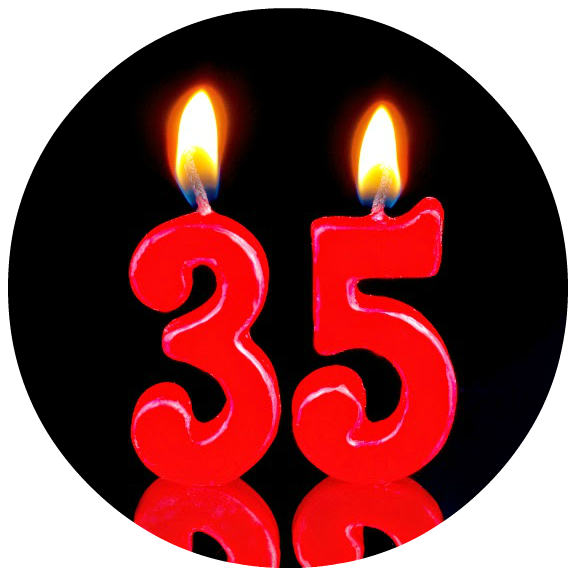 35th Birthday: Yesterday was my birthday and I was completely overwhelmed with love by SO many friends and family. From the massive pile of FB messages and PMs alone (over 100!!), it was just so heartwarming. I just wanted to take the time HERE to say that you all made my day. Last year on that same date, we "finished" miscarrying our daughter. It was a dark thing to happen on your birthday and I never thought I'd want to celebrate another one again. You all made it better by throwing so much love at me. I knew it came from women and men who have been through loss themselves, grieved the emptiness of their own wombs, and yearned for children. 35 is a dark birthday for any woman trying to conceive because you *know* your risks increase and that your fertility decreases (can it actually decrease from zilch?). So amazingly, y'all made it a special one in SPITE of that just by taking the time to send so much love my way. Many, many thanks for that gesture. It made a big difference in my world! And there was only one friend who texted me "Happy birthday, hope you can get pregnant and STAY that way!" Uhhhh...................thanks? 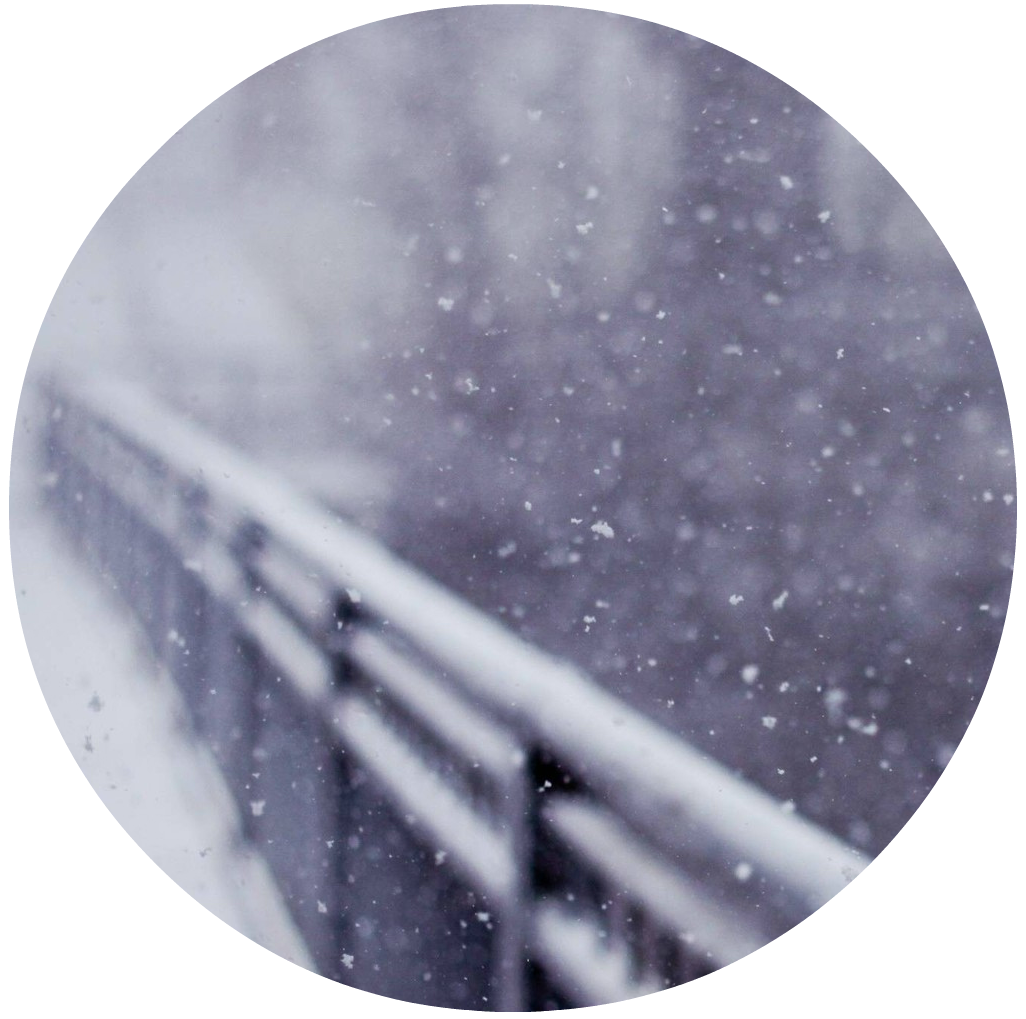 Snow: I was born in a blizzard. And for the past 35 years, it has always snowed a little (if not a LOT) on my birthday no matter where I have found myself on that day. Florida comes to the top of my head of odd places that it snowed while I visited on my February birthday! Anyhow, this year did not disappoint. I warned people to ignore the forecast for whatever it said and to expect snow of some kind (like I do every year - I'm like the Paul Revere of February 12th snow!). Yet with 50ish degree F (10 C) weather called for on the news and online and only the tiniest % of snow listed...I think they said 2% last I heard? (I don't even pay attention to weathermen on my birthday anymore) I knew there would at least be flakes, if not more. People refused to believe me. Mocked me, even! So you all can imagine my pure joy when all of my friends I have in my city began to post pictures of the snow and declare their shock, awe, and amazement. Snow is my birthday present from God. At least, it has been for 35 years. It wasn't enough to stick...but the beautiful little flakes still fell and everyone stopped for a moment to take it in with silent awe. It was a great gift.

What infertile women eat: Cupcakes! Fruit Tarts! Massive quantities of sashimi and avocados! Being on a restrictive diet usually means birthday celebrations that involve food aren't thought to be much fun. I didn't expect much in the way of a "treat" this year given that I'm just in the beginning stages of food reintroductions after a full month of Paleo AIP. And if you read last week, even that wasn't going so well! Despite all that, I wanted a yummy birthday treat. I found this Paleo-friendly french silk pie. The photos were amazing (red flag! Paleo dessert photos lie!!!). It was such an absolute disaster. And I say that as someone with a fair amount of culinary and pastry skill. Be warned. So needless to say, I quickly abandoned that idea and re-purposed the ingredients into two things I knew would work. One was a fruit tart (GF crust, coconut cream "custard" and some fruit compote for the creamy layer, and fresh berries on top with a honey gelatin glaze) and the other were some GF cupcakes (one of which I freely admit I ate for breakfast - long running birthday tradition!). The cupcakes turned out INSANELY good. Triple chocolate fudge, and coated with cocoa nibs. I was just floored at the yumminess. It wasn't good for "what it was"....it was just GOOD. Completely winged it though, because I was working with failed recipe leftovers from something else. Hoping I can recreate them now! Anyone else who is on an AI diet (or Paleo or Whole 30, etc. etc. etc.) will understand how rare these kinds of insanely delicious treats are. Since it was my birthday, dinner needed to be something special too. My favorite grocery store had sashimi grade Ahi on sale and when I told the clerk I was shopping for birthday dinner ideas, he marked it over 50% off the sale tag and said "enjoy and happy birthday!". Instructions followed, kind sir - it was definitely enjoyed! Ate like a queen today, very unexpectedly.... :) Catholic praise: I posted a blog yesterday where I did a mash-up of online marriage retreats. Just something I thought of on the fly the day before. It took a while to put together because of so many links and media that needed to be embedded into the post. Anyhow, I didn't expect much. Not many people ever read my little blog. Just a handful of people, I think. To my giant surprise, a few different diocesan offices from around the US have contacted me and asked permission to republish that blog post on their websites as a resource for their parishioners! To say that I'm surprised (and delighted) is beyond an understatement. Honored? Humbled? Anyhow, not "bragging" so much as just sharing here, because these three retreats are what DH and I are going to be adding for Lent this year. Thought y'all might like the idea too and that's why I'm sharing it here, in case you missed it yesterday! :)

FCP Training: I received an email about a potential scholarship for EP1 of FCP training (that's 'education phase 1' for non C.reighton/NaP.ro people - it's 1 of 2 intensive Master's level classes required to become an FCP, both 'classes' are over a week long and completely immersive). The woman in charge of this particular educational program sent the message to me yesterday when she couldn't have known it was my birthday. She told me I was a perfect candidate for their program and hoped that I would apply. She went on to share the details, including all the necessary applications for the program and the scholarship (the program involves a year commitment, the scholarship might involve partial grant for tuition). Well......the deadline is February 16th...a mere 3 days from now. She said she was trusting that God will help move some mountains if it's supposed to happen right now for me.  This might be a good time to share a little personal tidbit about myself. Of all the jobs I've had in my entire life...most of them were offered to me on my birthday. Never planned, it's just always gone like that for some weird reason. My DH and I can't help but think we need to pay attention to this extra little detail of the "timing". What are your thoughts, internets? The tuition and fees themselves for the first phase are about $3,000. We don't have that kind of money to spare. That means we'd be entirely dependent on a partial scholarship (if we got it), and potentially having to crowd source the rest. That makes me really uncomfortable even thinking about this. And I don't even think I know enough people who have a clue what C.reighton is enough that they might consider donating to that cause. Sigh. So my hopefulness that this is something I should be moving in the direction towards wavers because of that one obstacle. But yet we don't have time for anything to waver! We have 3 days to process these thoughts/emotions and to apply for something that is going to involve a LOT of time, resources, frustrations (I'm sure!)... but I digress. Anyhow, would love your feedback, suggestions, thoughts, etc. about this one in the comments. It would help. 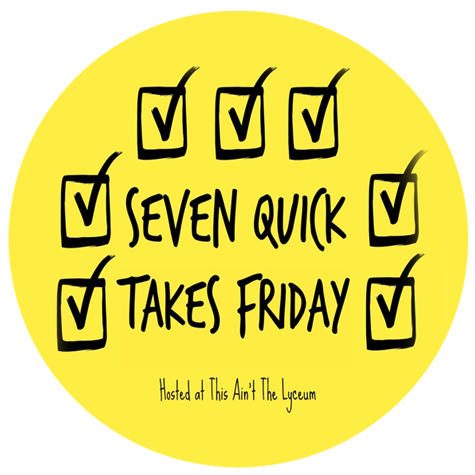 Host
Go visit our gracious Seven Quick Takes host for the link-up @ This Ain't the Lyceum!

Posted by Conceiving Hope at 5:21 AM