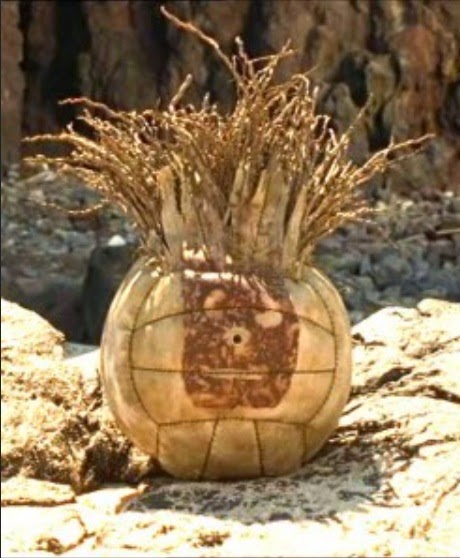 When I first arrived on the island, I didn't know anyone else was here. I actually thought I was alone. All evidence pointed to it. I slowly began to let the loneliness creep in so that I could find a way to settle into my new normal. Life would eventually have to take a new form no matter what, right? So I might as well just put my feet into the sand and own this.

And that worked for a little while.

About a year into the solitude, I wasn't as settled as I had hoped. I was fine with being alone, but I wasn't OK with the circumstances that led me to it. Late into the nights, I would sit and think about what life used to be like. How had I taken the little luxuries of life for granted all those years? It was one of those nights that I realized there were sounds coming from the other side of the island. I had no idea what to make of that. All at once I found myself questioning everything. What was happening?? Was I finally losing my mind in the solitude?

And there was the sound again...

Had I been alone all along? Was someone newly marooned here with me? I had to find out. As I crept through the sand along the sapphire shoreline, the moon hung like a lantern from the midnight sky. The air was hot and salty, and the sand beneath my feet was familiar. This was my beach and yet all of a sudden with one sound...it wasn't anymore. As I drew nearer to the sounds, I could see motions and the faintest flicker of a flame. I wasn't alone. How wasn't I alone?! My breath caught in my throat and I felt like a great wind came sucking at me. It was deafening. The truth in front of me seemed impossible. Yet there it was...

I eventually made my way to their camp, still slightly stunned, feeling like my lungs were stinging and my brain was spinning. There before my eyes was a small group of women dancing in a circle in the sand like they hadn't a care in the world by the light of the moon and a small bonfire. They were laughing and joking and.....I was pretty sure I was dreaming at this point. Alas, no amount of pinching stirred me from this bizarre dream. They were real. And so was I, apparently....because one of them saw me.

She walked up to me and took my hand and invited me to sit with her by the fire. I sat there, unbelieving, and bathed in the warmth of the amber flames. People slowly began to introduce themselves. They welcomed me. Me!! As if I needed welcoming to this place. They asked me questions. I mostly just sat there in silence, listening to everything they had to say. We definitely spoke the same language, but I understood so little of what they were telling me. I was struck by how friendly they were, but hesitant to share much about myself. Just minutes before, I had been in my own little world, surrounded by nothing, and now on my deserted island....there was fire, and dancing, and questions, and people and conversation.

My head kept spinning, but I finally found myself able to focus in on the conversation. I wasn't the only person wondering why they (or any of us) were there, but the others didn't seem to focus on the why as much as I found myself doing. There was a great deal more to talk about, as far as they were concerned, and it made me uneasy. It has been almost a year since I had even spoken about my situation and the island to anyone. I didn't even recognize my voice at first, let alone relate to my own words. I must have sounded like an imbecile because I had no answers to even the easiest questions. All I had was amazement and attentiveness to what was going on around me.

As the night drew on, the fire began to fade and crackle into smoldering embers. The conversation died down as well. I don't quite remember when we all went to sleep, but I remember my dreams weren't nearly as vivid as the events of the night had been. I actually slept peacefully for the first time in months and awoke feeling refreshed. Even if there was no way off the island, we had each other. Even an introvert appreciates the camaraderie of other warm bodies. It's not all books and solitude for us.

At first, I wasn't sure if it was my memory or not, but there seemed to be fewer people still there in the morning light. I remember rubbing my eyes, thinking maybe I was still stuck in a dream. Alas, it wasn't like I had counted them, so what was the point of being unsettled at COMPANY of any kind, in any number that was more than the figment of my imagination? Absolutely none! So feeling sufficiently wierded out, but not sure what to do about it, I found myself in conversation with people as the day wore on. Morning turned to afternoon and I began getting the same nagging feeling I had when I woke up. Was someone missing? I actually had counted this morning and I couldn't seem to get the same count by noon as I had earlier. Something weird was happening. I began to get the sense that this was all a very elaborate Lost-like dream. Part of me expected a creepy fog to meet me on the beach and toss me backwards into the surf.

Thankfully, nothing fantastical like that seemed terribly likely....but I still felt a uneasy. How would you feel if people began silently disappearing? It was a bit silly to think something supernatural was a real possibility to begin with, but being alone on an island for almost a year will make you question what's real and what's not. And you will definitely see things and hear things that seem improbable. You even have enough time to convince yourself of things that are nonsense. I had devoted a lot of time to just that actually.

The group was large enough that we tended to naturally subdivide into smaller little sub-groups during the day. It's not that we got along better or worse with the small groups than we did with anyone else... it's just that the small group dynamic seemed easier to interact in, for some reason. As time wore on, I felt more and more comfortable with the entire "herd". While I still had the nagging feeling that it was shrinking each day, I was developing meaningful relationships with people. And I was so grateful for it. I wasn't sure in the beginning of being deserted if I would ever see another person again, let alone a group. So this was too good to be true in a lot of ways, and I intended on soaking up all this opportunity had to offer, even if there was something weird about the situation. Just the effort involved in interacting with these people reminded me of everything I probably took for granted in all of my other relationships prior. This tight connection we formed with each other made us wonderful collaborators. We were developing brilliant plans to leave the island - ones worth getting excited over. But we didn't *just* keep ourselves busy analyzing ways to escape, we spend quite a bit of time developing the environment we occupied in the present. We made it our home.

One evening after there had been a storm, I found myself looking for company. Do you ever feel that way? Just that you don't want to be alone? Anyway, I went searching for my people and that's when I learned the unfortunate truth I had known all along.

People were disappearing. Only now it was people I called close friends. They had all been disappearing all along. I found myself in a panic, not knowing where they were going or why. Part of me still felt like this was and always had been a dream. How far back did the dream go though?? How could I have been here all on my own and then suddenly and inexplicably have company? How can people possibly be disappearing? None of it made sense.

In truth, all of these questions were futile and a complete waste of time. The only thing I understood is that the rest of my time on the island would be filled with the anguish of knowing my companions were disappearing. Maybe not all at once like a giant alien abduction or something dramatic like that, but they were in fact disappearing. It wasn't my imagination. Whether it was something happening on the island itself or some depressing last-ditch effort where people were quietly flinging themselves into the sea, I'll never know. It didn't matter why they were leaving or how. It just mattered that they did.

And somewhere in all of that, I found myself alone again. Sitting on the beach, toes in the sand. Again. I could have been talking to a stupid blood stained volleyball for all it really mattered. There was no one within the sound of my voice. And even having a voice no longer seemed to matter.

It's been a couple of years (I think) since I found myself on the island. People have come and gone a few times. I'm always surprised to see them and horrified when they disappear. There doesn't seem to be any way for me to leave though. Despite all of my trying, all of my maneuvering, and even begging them to take me with them when they leave, I'm still here.

And so that's how my story begins and ends. My new normal is realizing that everyone else gets an exit from this infernal place. And at some point, no matter how much I want them to stay, they all leave. The only comfort I can seem to find is what we build while they're here. They're never really here for very long though. Even when they are here for a deceptively long time, they still always leave. And yet (perhaps foolishly) I never expect them to leave so soon. I'm the only constant... unless this island holds more secrets than I've already seen.

If I'm really dreaming, I wish this night would end.
Posted by Conceiving Hope at 10:05 AM