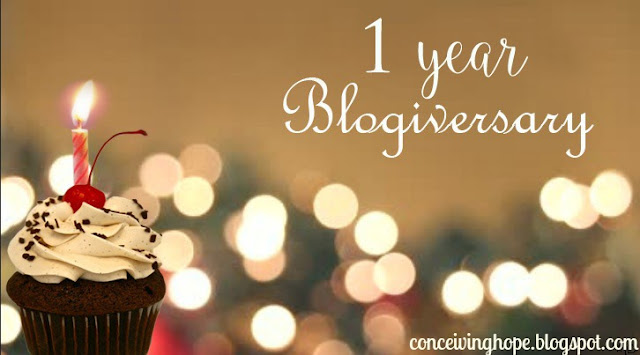 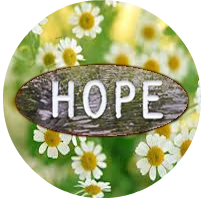 1. So it's officially been a year since I sat down at the keys and figured out how to make a blog! And then, miracle-of-miracles, I kept up with it. So, umm, that's never happened before... And while it feels like an accomplishment unto itself, this blogiversary is also a stark realization that I am not yet a mother to a living child. It doesn't weigh on me as heavily every day as it did a year ago, and that's a good thing. There is no less desire in my heart for a child... but I focus on the likelihood of it happening a lot less now than I did when I first sat down and put my fingers on the keys. I've been conceiving hope in other ways, trying to make the best of this infertile prison... while I watch everyone else leave the island. It's a surreal feeling. I write this not so much as a depressing update, but as a reminder to all that the pains of infertility don't always end in having living children. So many of the people I have met online since this journey began (read: most) have moved on to family life raising children. That's just not our story. And I actually think it gives a little hope to others in the same situation to remind them that they aren't alone. Our dreams haven't come true either. We're praying with you. 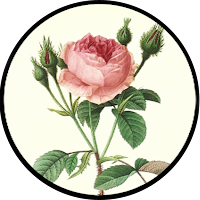 2. I never set out to write a blog that got a lot of clicks. And it's a good thing I didn't measure any success on that. But while the traffic here stays low, the private interaction with my audience stays high. You all are searching for the same answers I'm searching for... and when I get up the courage to write a prayer, offer friendly advice, or seek to pray with you, it seems to matter to you. So thank you, dear readers. I hope you will continue on this journey with me as I try to make sense of the God's Plan. I'm slowly getting out of my blindered IF haze and starting to learn how to live life again. Gracious thanks for your encouragement! And thank you to everyone who prayed along with me on the Twin Novena that I finished today! 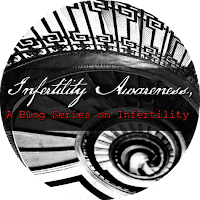 3. Y'all apparently love a good series, advice, prayers, recipes, and a little controversy! The most shared, read, pinned, and tweeted posts seem to be the ones that are really written with a raw heart here. One of the things I set out to do at the beginning of this was to write the posts I was looking for and couldn't find. I wanted to be able to have concrete words to give people to say this is what infertility really is and this is why IVF is wrong and any number of posts I haven't even been able to write and publish yet. My hope is that the traffic on these posts means you were looking for the same. Any time you comment, I feel encouraged... so keep it up if you find this content helpful! :) 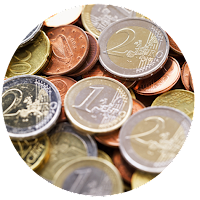 4. There has been some change going on in my life recently (hence being at the keys a little less). I can't really talk about any of it publicly yet, even with this being an anonymous blog. Some of the change is for good, some of it isn't. We'll have to see how it all pans out. In the meantime, I'm trying to distract myself with my studies and to be the best at FCP-ing as I can be. So far, I'm about 1/4 the way through the program to certification. It's not much yet, but I'm doing really well with what I have already accomplished and hoping that streak continues. I'll reach the 1/2 way point in September 2015.... so keep me in your prayers for that? Thanks! 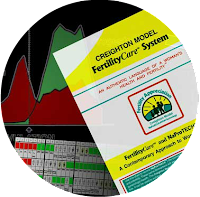 5. After many months (read: years!) of craziness in my luteal phase, I've reached a good and stable post peak phase of 15 days. PMS is gone for the most part, thanks to my post peak supplementation and the LDN. Now it's just a matter of trying to figure out the ovulation defect and how to improve that. A doctor recently mentioned that micro-hCG injections pre-peak could be the way to stimulate better ovulation for people like me. I'm interested in learning more and will let you know what I find in my research. But seriously... back to the absence of PMS... there needs to be a parade!!! 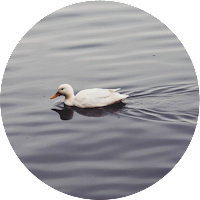 6. It's been a while since I gave an update on Duck Watch here on the blog. It's an idea I came up with last October that involves a mighty adventure. The adventure has not yet unfolded, nor have the ducky details. Right now, all you know is that it involves a duck. Potentially some water. Potentially a traveling adventure. And it will likely happen in 2015. Ravenous for a clue? Care to venture a guess? Here you go: It's American, French, and English at the same time...and manages to be very gassy while still being terribly classy, if you can imagine that. 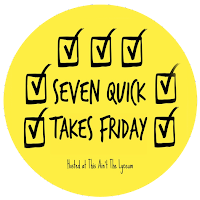 7. Remember to give the 7QT host some love! It's been a while since I linked up, but I hope you enjoyed this little edition! :)
Posted by Conceiving Hope at 9:40 AM