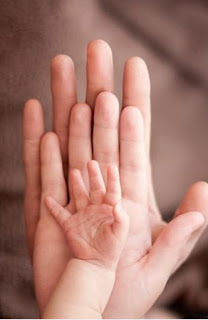 Would you ever tell a mother dealing with toddler craziness that she's just too focused on the negative stuff and she needs to find a hobby?

Would you tell the postpartum mother of an infant that she chooses to focus on what she doesn't have instead of seeing all the blessings in her world?

Would you tell a mother of school-aged children that she obsesses too much about what's wrong with her family and needs to focus on other things outside herself?

Would you tell the mother of teenagers, who is struggling with their hormonal feelings and all that comes with them, to just let go and let God?

No. Flat no to all of those, right? If you said yes to any of those... you aren't the family/friend who is valued for your unsolicited advice. You make the mother feel worse... and furthermore you project a giant deflector shield when your family/friend reaches out for support and solidarity if you refuse to be compassionate in those moments. You may be present, but your compassion is not free.

We do these things to infertile women constantly. How many surgeries until you give up? Why don't you just: relax, go on vacation, adopt, stop obsessing, stop being a hypochondriac, find a hobby, focus on your husband, stop complaining?

You see, childless women somehow deserve to be diagnosed by you, not simply loved in their sadness and difficulties. We tell childless people awful things, often when we can't relate to their struggles, and then we move on from their lives and slot into family and friendship interactions that we can better relate to... because it's either more comfortable OR because we perceive that we've fixed the childless person's problem already and there's no reason to linger on the topic. They are just in a different phase of life, you tell yourself. That's all. They apparently deserve to be put in a box and dismissed.

The childless remain childless in the wake of your demeaning, insulting, diagnostic, uninformed, well-meaning advice. The only thing that we ensure by talking AT them instead of entering into true compassion with them is that they will feel worse and be assured that they are as alone and unsupported as they feared. How could their vocation, equal in dignity to yours but never changing in obvious outward ways like your life with children does, be less than?

God never taught us that everyone would be gifted a child in this life. He also never told us to diagnose or dismiss or talk down to the childless. And he certainly didn't tell us to judge motherhood by how many children it produces.

We are a fickle people, us Christians. We want everything to fit neatly in a box... and yet it rarely does. When we encounter people who suffer in any way, we need to remember that our job is to listen, provide comfort where possible, and be compassionate. It's not our job to play doctor, philosopher, and parent the childless. Their hurt may never be diminished in this lifetime, but they are not less than you and your brood of 10. Furthermore, you communicate that they ARE less than you and your brood of any size when you create distance. It isn't anyone's job to interupt God's plan for the childless couple's and tell them that they lingered on the 'having children thing long enough and it's time to move on'. That conversation with God doesn't include you just like your family growth and God's plan for your life isn't dependent on the opinion of the childless. It's more than not helpful though - it imparts an injury. Maybe you bounce back from such injuries quickly, but I assure you the childless rarely do.

Silence often speaks judgments you don't intend, as you likely know from your own unique interpersonal struggles that aren't within your control to overcome. What is your silence communicating to the childless in your life? That you are just too busy and that children are the most important part of your family? God didn't teach us that either.

If family matters at all, the existence of it in couple form needs to be given the divine respect that God imparts unto it with the sacrament that created it. And maybe the next time someone tells you what to do in a painful situation in which you are grieving... you will remember that being placated with dismissiveness in the form of advice or a layperson diagnosis would never make you feel better. You aren't loving someone by ignoring them, judging them, dismissing them, diagnosing them, or otherwise acting superior to their station.... but you are diminishing your own vocation.

Do you deprioritize childless people and treat them as less than? Do you judge motherhood by the number of children she mothers? These seem like things you will want to bring to the feet of Jesus. They aren't part of your vocation or a legitimate manifestation of your Christianity. You will find no judgment from me either way...I'm still over here trying to conceive hope in any form I can.
Posted by Conceiving Hope at 8:16 PM