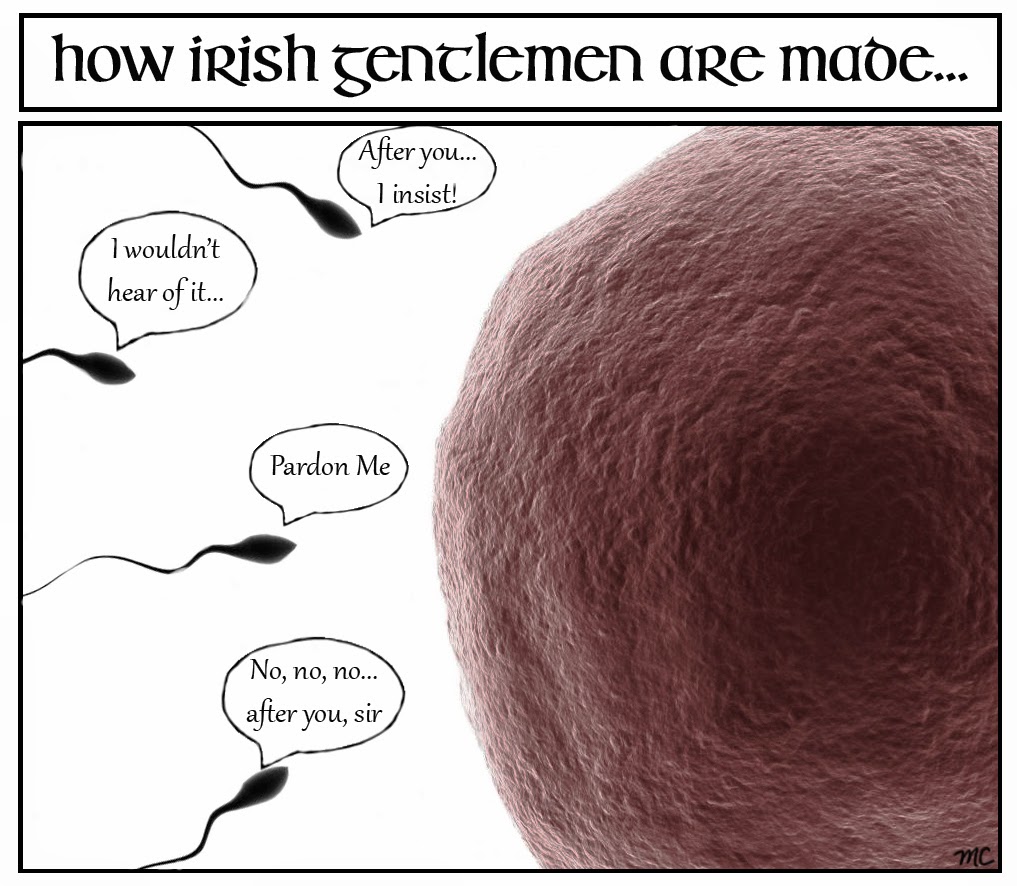 I can't help it. After being married to an Irishman and interacting with Irish culture in a plethora of every-day-casual-and-formal situations, this is how things work. There is a very different culture to kindness in Ireland. Kindness and deference and pardoning one's self is such a pervasive part of how people interact with each other. It's easy for an American to view it as insincere or passive aggressive (and maybe a small amount of the time it is...). For the most part, there is a lot of sincere giving-people-the-benefit-of-the-doubt going on and Olympic-strength-conflict-avoidance. (Yes, even when conflict might resolve the situation cleaner or more quickly!).

Did someone do something rude to you? You apologize to them. Did someone jump in front of you in the queue? By all means, after you sir. No sarcasm to be heard anywhere in any of those situations or the reactions to them. This American has laughed more than once at that practice. So who am I to think that conception would be any different...? Maybe I just figured out why this whole having-a-baby-thing is taking so long after all.... no, no, after YOU... :)

On a different note entirely, there is also a small part of me that thought the cartoon title made it sound like I would be posting an alcoholic drink recipe. How to make an Irish Gentleman. It really does sound like a recipe intro, doesn't it? If you visited this link thinking you were getting cocktail recipes and drink advice, let's fix that right now. And let's call it the Irish Gentleman Cocktail.

Combine the following, shake vigorously with ice,
and serve chilled over ice in a highball:

Drink it quickly and take your progesterone shots... :P

P.S. If you were waiting on bated breath for the announcement of the winners of the 2015 Sheenazing Awards... you can find them over @
A Knotted Life. Lots of awesome Catholic blogs to read in her list. We're grateful to have received an honorable mention this year!

Posted by Conceiving Hope at 3:46 AM

Email ThisBlogThis!Share to TwitterShare to FacebookShare to Pinterest
Labels: humor, IF, Irish